A comprehensive rundown on how to put a professional infographic together.

“Use a picture,” one of the oldest and most frequently recited idiom goes, “it's worth a thousand words.” Though incredibly cliché, this statement still bears merit, now possibly more than when it was first used in print over a century ago.

Both in print media and all over the net, visuals in combination with text are used to graphically illustrate a concept, map a geographic location, or present raw to graph data. In particular, the use of infographics which incorporate multiple images, charts, and illustrations with snippets of texts is an especially effective means of doing this.

Information has been presented this way for decades prior to the net but in the age of the internet the use of infographics for advocacy, entertainment, and marketing purposes as risen at an astronomical rate. Searches for infographics jumped by 800% between late 2009 and the middle of 2012 according to experts.

Just as television entertainment and advertising overtook radio last century, infographics are acting as a major disruptive force in the blogosphere and text-based digital marketing realm. We're going to look at the basic aspects of making a stellar infographic and why you should care.

What Exactly Is an Infographic?

Broadly speaking, it could be argued that most images with text laid over an image are an infographic of sorts. But to use a more specific, useful definition an infographic is a visual medium which incorporates minimal text, accurate data, and references to communicate information on a specific topic.

As SpyreStudios Magazine summarizes, an infographic consists of three main parts:
• Visual – a series of referential icons, illustrative graphics, and stimulating color scheme
• Content – the statistics, dates, number or other quantifiable information
• Knowledge – textually clarified information which is backed up with verifiable references

Most importantly, an infographic must condense the information being communicated as much as possible so it can be easily understood, even if a viewer glances at it for only a few moments.

Why Should I Design When I Can Write?

Why are infographics so effective at grabbing a viewers attention and delivering memorable information? Because to the human brain pretty pictures are far more interesting than a page of tedious text. The reason being, according to Marcel Just, human beings, rather than rely on constructed symbolic communication, have for hundreds of thousands of years used spoken language with reference to the star patterns, the direction of distant rivers, the specific shape of mountains, and other landmarks in order to share information about the world around them.

By contrast, written language is only about five thousand years old. Further, rates of global literacy above fifty percent are an even more recent social phenomenon – being merely fifty years old.

As a consequence, for most people information is rarely retained a few days after exposure if presented orally or through text alone. This changes drastically when the same information is accompanied by images.

“Text and oral presentations are not just less efficient than pictures for retaining certain types of information; they are way less efficient. If information is presented orally, people remember about 10 percent, tested 72 hours after exposure. That figure goes up to 65 percent if you add a picture.”

After all, think about the number of text posts you see – and actually pay attention to – in your Facebook feed versus the number of photos, other static images, gifs, and videos. Which sticks out in your memory more?

Consider also the manner in which information is exchanged on other popular social media platforms like Twitter. A written statement, being limited to only 280 characters, is typically short and punchy, but may often incorporate some kind of emoji or large graphic image as well.

In fact, Verge reported that images – among other attachments – will no longer be counted against a single tweet's character limit. As a result, posting an information-rich image containing a combination of words, graphic data, and illustrations, circumvents this limitation while also increasing the chance your post will be shared.

When Designing What to Do...

In a sense, an infographic is an inverted blog post in that while a blog has lots of text relative to a few pictures, an infographic should be designed in the opposite manner. So when writing your content keep it simple; boil everything down to its essence and strip out any unnecessary fluff.

1. Use Pleasing Font and Size

Just like traditional text-exclusive advertising always use a legible font. After all, no one enjoys reading one to four thousand words of even the most wonderfully composed text in Segoe Script or Comic Sans. Instead, in order to be readable yet standout from banal fonts like Times New Roman and Arial, we recommend using one or two like Sans Serif or similar font.

Also be sure to use different sized text so that certain that important information stands out. Just like a piece of copy or a blog post will use a different size for a title and subheadings to break up the monotony of reading a body of text all the same size, so too will doing the same for your infographic. This can be a little tricky, but a good rule is, if you look at your graphic and you get a headache, you've probably used too many colors. For beginners, we advise doing what many artists do, use complementary colors since they provide a stronger, eye-catching contrast. This will make one set of data, or an illustrative representation of it described in text distinctly stand out from another fact.

In total, we recommend using a pallet of about a dozen colors and shades, besides your background, at a maximum to keep the visuals engaging but not overpowering. With respect to the background, using a neutral color such as white, gray, beige or black will make your brighter, more dominate colored icons, charts, graphs, and illustrations standout to the viewer. 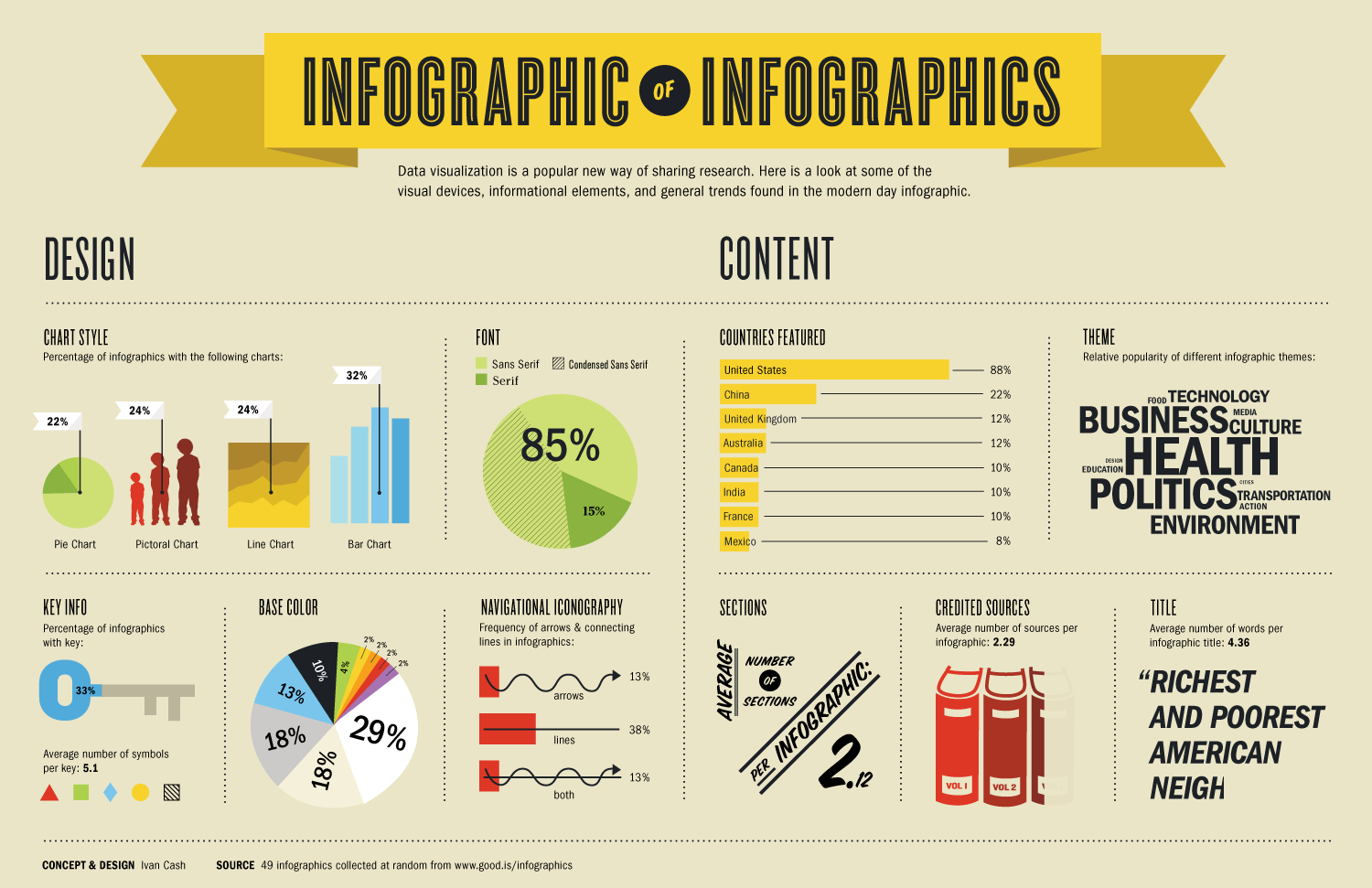 Visualize data, don't describe it in a wordy fashion. To put it a different way, information such as statistics, trends, and percentages looks best when represented in an accompanying chart, graph, or other symbolic, non-textual format. Along with that point, anything with a number should be represented using Arabic numerals and never spelled out.

1. Include Too Much Text

Avoid a text fest. Not only is it boring, viewers will likely lose interest. Keep in mind, it's 2017 and most people's attention span isn't sufficient to absorb so much textual data in a single sitting.

Keep any text limited to one or two brief sentences per idea being communicated. Another alternative is to employ the use of bullet points. By using these you can get away with being grammatically lazy by not using complete sentences, but still, communicate snippets of memorable information which should take hold in a viewers mind.

Only accurate information matters, ever! When researching a topic, keep a list of authoritative sources you can reference in your graphic directly. In a world of clickbait, fake news, and alternative “facts” this will not only lend credibility but also prevent you from making an embarrassing factual mistake.

Since this medium rests so much emphasis on visuals, placement of data, charts, and icons is extremely important. It's always best to place the important information in the center since that's where the viewer's eyes are most likely to be drawn. Just be careful not to pack too many graphics and icons too close together or in your image. To refer to the guru of all net marketing Kissmetrics:

The Best Tools To Create An Infographic?

Do not, I say again, do not use a program like Microsoft Paint. First, basic art programs like this come with a limited number of tools, so making various objects such as a pie chart or graph can be incredibly difficult. Second, Paint and other cheap programs only save in .png and .jpg formats. So, if your infographic turns out to be too small or need be resized, you face one of the worst problems when making marketable graphic content: the pox of image pixelation and compression.

Instead, use a professional tool like Canva, Venngage, or Edraw. The advantage of these programs is that they are relatively easy to use and are programmed with helpful, specialty tools which will allow you to make your infographic really “pop” with a level of uniqueness and professionalism. To make things even better, most of these services are either inexpensive or even free!

Another option, particularly for those who are bloggers, is the use of Adobe Illustrator. The reason bloggers may find it useful is that Illustrator's versatility allows the user to design and publish a variety of other graphic content such as website icons, logos, or various illustrations. Further, Illustrator uses vectors rather than pixels so your infographic, as well as any particular elements within it can be resized, reshaped, or otherwise modified without image distortion.

If you don't know how to use those programs, there are several tutorials anyone can study for free on sites like YouTube which will lay out detailed instructions for any beginner or expert trying attempting to design a masterpiece infographic.

“I Can Write, But I'm Terrible At Designing Anything”

If you are nonetheless hopeless at graphic design but are able to do research for and visualize the approximate appearance of your infographic, there are other options. Rather than do all of the work yourself hiring a freelance graphic designer on a site such as Fiverr and Upwork is highly recommended. Both sites are awash in hungry designers at various skill levels and pay rates, which you have the luxury of selecting from.

If you are flush with cash and you want the utmost quality we recommend you hire a top-tier professional through sites like Visual.ly or through Linkedin.

Though most competent designers can work solely off written instruction, we still recommend that you attempt to draw and send them some kind of rough sketch so that what the graphic your designer produces is every bit as close to the vision in your mind.

The Importance of an Oil Change

An oil change is the most affordable way to keep your engine running efficiently.

We've moved on from simple games to addictive ones and this the problem. 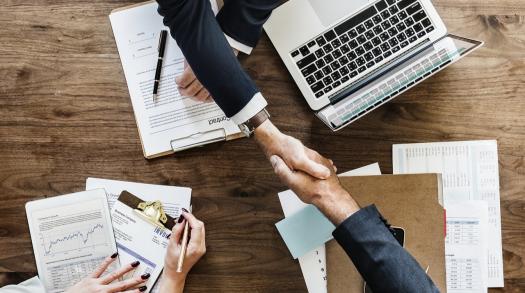 Start-Ups of the Future - Why You Should Hire a Freelancer

Accessing a diverse, worldwide talent pool means being a start-up is easier than ever